You are here: Home / Health / Diabetes and Insulin Resistance – How Diet Can Help 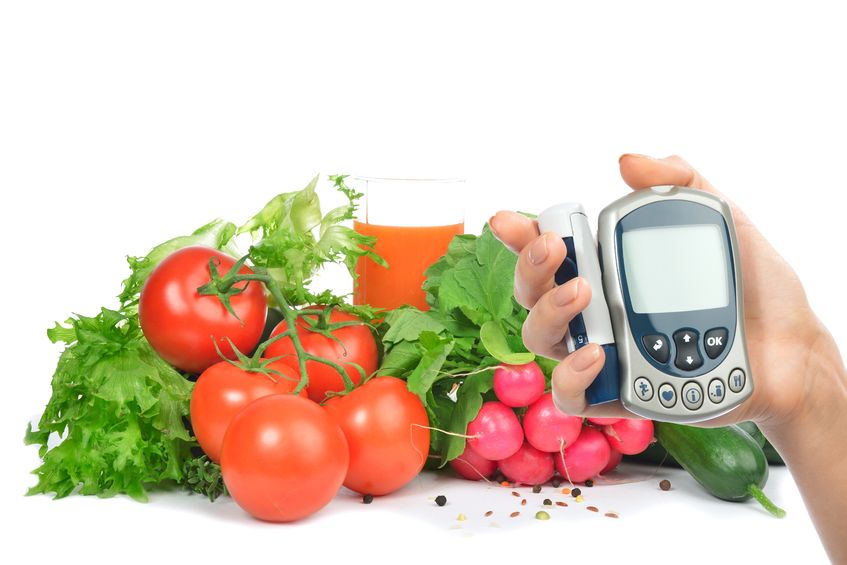 Over the last 30 years, the global number of people with diabetes has quadrupled to more than 314 million having been diagnosed with diabetes (1). The causes for this rise in diabetes are too numerous to discuss in this article, but they most certainly begin and end with nutrition.

The Road to Diabetes

The good news about these scary statistics is that diabetes as a disease is completely preventable and treatable. The path to developing full-blown diabetes is a long one, with many chances to reverse the course of the disease and hold off the progression of insulin resistance into diabetes.

Insulin is a very important and helpful natural hormone produced in our body. It is released by the pancreas in response to us eating any form of carbohydrates. In a healthy person, the carbohydrate is digested into it’s simplest molecule-glucose. The glucose is then used for fuel or stored as fat for future fuel.

After digestion, the glucose molecules enter the bloodstream causing a temporary rise in blood glucose levels. The glucose does not stay in the blood stream and is transported by the insulin to wherever it needs to go. This could be the muscles, liver or even the brain. The insulin effectively acts as a key, which unlocks these cells so that glucose can be used for energy (2).

Unfortunately for some people this key and lock mechanism is faulty. Due to various reasons, the body cells sometimes stop responding to the insulin. The consequences of this are two-fold. Firstly, the body detects that the levels of blood sugar in the body are not decreasing and secondly, the pancreas then produces more insulin in order to bring the blood sugar down. The problem with this is that it only worsens the insulin resistance as the cells are bombarded with more insulin it fails to recognise. The insulin then simply acts as a transport to store the glucose as fat (3).

How Your Diet Can Help

Carbohydrates as a food group have been in the press a lot lately and shunned as the bad guy. It is important however to understand that not all carbs are created equally. When you are trying to either control your diabetes or reverse your insulin resistance the key lies in the quality of the carbs you consume.

The high-quality dietary fibre available in complex, unprocessed carbohydrates has been shown to increase insulin sensitivity and also protect against the development of diabetes (4). The takeaway message here is not to totally cut carbohydrates out of your diet but to rather eat those which are as least processed as possible. We’re talking sweet potatoes, brown rice, and oats for example.

The next step to take when it comes to carbohydrates is to ensure that you are strictly observing portion control. Here the main message is that yes, you can have your carbs but in smaller amounts spread over the day (5).

Start by halving your normal carbohydrate intake at each meal. For instance, if you normally eat 4 slices of whole-wheat bread, start eating 2 slices. That might sound like a lot less, but the key is to rather eat less at each meal and eat more frequently if necessary. Essentially your body is able to process and digest smaller amounts of carbohydrates at a time rather than bombarding it with huge portions.

Additionally, start looking at whether you are active enough for the amount of carbohydrates you currently consume. If not, adjust your intake to your activity level. Let’s be honest, if you are sitting at a desk for 8 hours a day you are not in need of carbohydrates at each meal (6).

When we mentioned halving your carbohydrate intake at each meal you might have been worried about going hungry. You won’t. The trick is to fill the space with delicious vegetables that are low in calories and carbohydrates, but full of fibre and nutrients.

The increased fibre will ensure that you are fuller for longer, but as an added bonus, the fibre will also help slow down the digestion of the whole meal (7).

Aim to fill your plate with fibrous vegetables such as broccoli, cauliflower, Brussel sprouts, cabbage and green beans.

Get Rid of Your Sweet Tooth

This one may seem like a no-brainer but even if you have cut out sugar in your tea and coffee you may still be taking in too much sugar in other forms: