You are here: Home / Fitness Nutrition / Supplements / Should you be taking Niacin (Vitamin B3)? 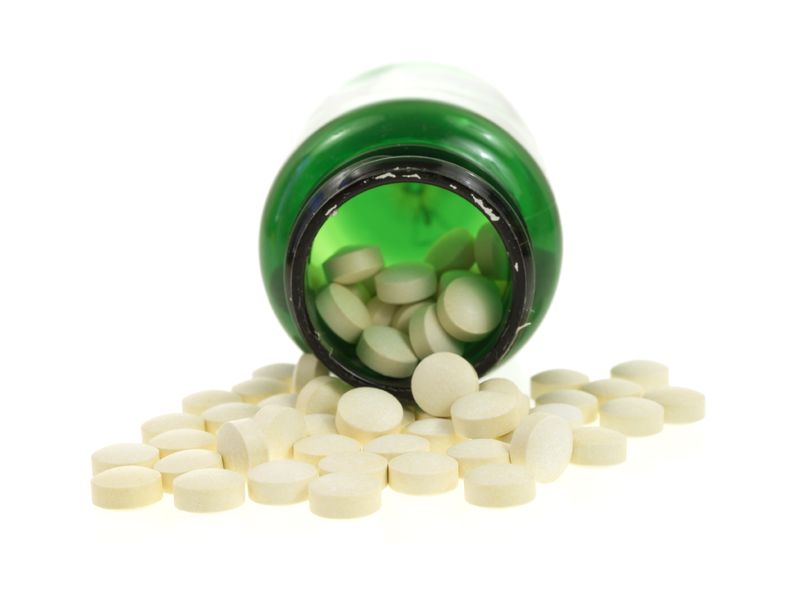 Niacin is one of the B-vitamins known as Vitamin B-3. It is a very common vitamin and is found in many different foods. You can find high amounts of Niacin in meats (particularly turkey and chicken breast), vegetables and fungi (mushrooms and peas), and in fish, nuts, and seeds. Because of the large variety of food sources for Niacin, it is rare to be deficient in it.

People who are deficient in Niacin are usually suffering from some form of illness or are suffering from alcoholism [1]. If you are deficient then supplementing your diet with Niacin could be beneficial, but what about the majority of people who get adequate Niacin through their diet? Are there any benefits to increasing your Niacin intake past the recommended allowance?

A look at Niacin Supplements

Before looking at the benefits to supplementation, we should look at what types of supplements are on offer. You can buy single-ingredient Niacin supplements that contain nothing but Niacin (check to make sure that it actually is Niacin because a lot of companies sell Nicotinamide instead).

Then you can buy a multi-ingredient supplement such as Vitamin-B Complex. This contains Niacin plus all of the other B-Vitamins (Vitamin B6, Para-Aminobenzoic Acid, Vitamin B5 etc). Finally, there are a lot of supplements out there that function as fat burners that contain large amounts of Niacin, this is because a lot of people believe that Niacin can help increase fat loss. There is currently no evidence to support this belief.

The Benefits of Supplementing with Niacin

Considering the unlikelihood of someone having a Niacin deficiency in the modern world, we will instead concentrate on taking extra Niacin. There are at least a few benefits that have some decent evidence behind them, and there are a few possible benefits that haven’t been quite proven yet. We’ll take a look at both.

HDL-C stands for High-Density Lipoprotein Cholesterol and is more commonly referred to as “Good cholesterol”. The role of HDL-C is to remove, and recycle LDL-C or “bad cholesterol”, repair damaged blood vessel walls. All of this can help prevent heart disease and strokes. Studies have shown that Niacin can increase HDL-C levels.

Triglycerides are fat in the blood that is either used for energy or are stored for later as body fat. You can get Triglycerides from your diet (fats such as oil, butter, meat etc) and your liver also creates them.

There is nothing wrong with Triglycerides, but if your body is struggling to remove them from the blood this can lead to a larger than normal amount of lipids (triglycerides and cholesterol) in the blood – known as Dyslipidemia.

If HDL-C is the good guy, then LDL-C is the bad guy when it comes to cholesterol. High levels of LDL-C are strongly associated with heart disease and strokes. Lowering LDL-C levels is a very good idea, and will absolutely lower your risk of heart attacks etc …

Leptin is a hormone whose function it is to tell your body when you are full after a meal. Once you have eaten enough food your leptin levels will be raised and your body will send the message that you are full (sated). There was a belief for a long time that obese people had less Leptin than non-obese people. This led to a lot of supplements containing Leptin raising ingredients.
In fact, due to the large stores of body fat, Obese people have higher levels of Leptin than regular people. Unfortunately, they become resistant to Leptin, meaning that it takes more and more Leptin to make them feel full.

So increasing Leptin isn’t an amazing solution to obesity, but if you are not obese and are dieting then increasing Leptin levels is a great idea. This is because dieting usually lowers Leptin meaning that you spend all of your time feeling hungry, if you can increase Leptin without eating then you will be able to diet without hunger. Luckily studies have shown that supplementation with Niacin can lead to increased Leptin [5].

There are many benefits to increasing your growth hormone levels. They can increase strength [6] lower body fat and can increase your red blood cell count [7]. Having a higher GH level will lead to improved body composition, improved strength, and improved sporting performance (the main reason why athletes are banned from taking HGH).
In 1983 there was a study by Quabbe et al that found that taking a large dose of Niacin led to a massive rise in growth hormone [8]. Now, this study seems to be the only one of its kind and as a result, it wouldn’t be accurate to say that this is scientifically proven. Also, the amount of Niacin taken was huge! But as a potential benefit to supplementing with Niacin, this is pretty exciting.

Are there any side effects?

Taking Niacin within normal limits has no side effects other than the “Niacin Flush”, this is where your skin can tingle slightly and some people may experience a red face and sweating. Whilst uncomfortable at first this is a completely harmless side effect with no short or long term consequences.
Unfortunately, there is a belief among many bodybuilders that taking ridiculously high levels of Niacin can help them pass a drugs test, this is not only untrue it is in fact very dangerous. As examine.com puts it

So don’t take Niacin in ridiculously high doses and you should be fine!

Is Niacin supplementation worth it?

If you are overweight and worried about your cholesterol then yes Niacin supplementation could be beneficial, as would diet and exercise. If you are looking for a boost in GH or believe that it will help you with fat loss then you should probably save your money. Considering the availability of Niacin in the diet it is highly unlikely that you require a top-up, and other than the benefits of preventing heart disease there really is little benefit to taking it.