You are here: Home / Processed Food / The Truth about Aspartame 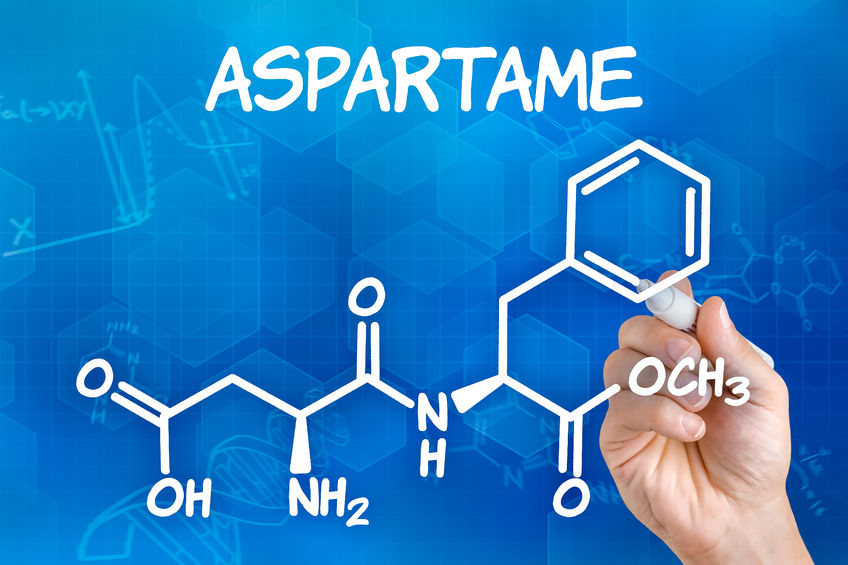 Depending on who you ask Aspartame is either a harmless sweetener that can help you lose weight or a cancer-causing chemical that should be banned from all food and drink. The fact is that the majority of people who use sweeteners don’t really know anything about Aspartame, but then neither do the people who want it banned.

Aspartame is a sweetener that was discovered in 1965, it is made from a compound formed from two natural amino acids L-aspartic acid and L-phenylalanine. Aspartame is actually similar to sugar in terms of calories per gram (4 cals) but due to it being 200 times sweeter than sugar only a very small amount of it needs to be used. This means that the amount used comes to less than 1 calorie per serving.

This means that food and drink that contains Aspartame as a replacement for sugar can end up being very low calorie in comparison whilst still tasting the same. So if you’ve ever wondered how drinks like Diet Coke taste sweet whilst containing almost no calories then it’s because they contain Aspartame.

There have been more studies into the safety of Aspartame than almost any other ingredient in the world. It has undergone incredibly rigorous testing and has been declared safe for everyone (including pregnant women and young children) to consume on a daily basis. So why is it that Aspartame is seen by so many people to be dangerous?

A brief history of the Aspartame Controversy

In 1996 John Olney published a paper that claimed to find a link between Aspartame consumption and brain tumours. This study became instantly popular in the media and it was here that Aspartame first became subject to scrutiny. What Olney found was that from 1975 to 1992 cases of brain tumour increased and found that Aspartame use had also increased:

“Compared to other environmental factors putatively linked to brain tumours, the artificial sweetener aspartame is a promising candidate to explain the recent increase” [1]

What Olney did was pick a possible reason for the increase in brain tumours (almost at random it seems) and then explain why he thought that this was the case. Some of you reading this may have noticed that this is not good scientific protocol, and he was crucified for it in the scientific community.

Olney looked at a graph of increasing tumours and decided that Aspartame could be responsible because its use had increased at a similar rate. Which is a bit like blaming the invention of cars for the rise in Diabetes, yes there is more people with Diabetes now than there was in 1900 but there is nothing about a car that causes Diabetes. The two have a correlation, but no causation.
So whilst his paper was claimed by many to prove that Aspartame caused brain tumours, it had in fact done nothing of the sort.

This may all have blown over and been forgotten about had it not been for a chain email that became very popular in 1998. The email was written by a Nancy Markle (real name Betty Martini) and is breathtakingly stupid [2].

She also mentions people developing “Aspartame Disease” something that is completely made up! With all these dangerous side-effects there must have been a pretty big reason why Aspartame was continually being found to be safe by Scientists and the FDA. Martini decided that the only answer possible was that there was a Conspiracy.

You see people who believe that Aspartame causes cancer or blindness or birth defects can only come to the conclusion that the big food and drink companies are hiding the truth to increase sales. They must also believe that governments in Europe, Asia, America etc are also in on this conspiracy because Aspartame has been proven perfectly safe in each of these countries.

This would also mean that the Scientific Journals that publish the countless studies [3][4] that have found no link between Aspartame and cancer, or brain tumours, or any of the other diseases and ailments mentioned were lying.

The conspiracy theorists place so much of their belief on a discredited study and a chain-email but refuse to trust their own governing bodies, approved studies, or nutrition experts.

Can Aspartame lead to weight gain?

There are quite a few people (usually personal trainers) who claim that Aspartame may not be carcinogenic but can actually lead to weight gain. They claim that this happens because Aspartame increases hunger and decreases satiety (the feeling of fullness).

A 2012 study by the Academy of Nutrition and Dietetics clarified their position that Aspartame has no adverse effects on appetite and can actually lead to weight loss rather than weight gain [5]. Another study by Bellisle (2015) found that Aspartame actually led to a decrease in the consumption of sugary foods, leading to increased weight loss [6].

In other words, not only is the claim that consuming Aspartame can lead to increased weight and appetite false, the opposite is, in fact, the case. The thing is nobody is seriously claiming that Aspartame is beneficial to health as an ingredient. It doesn’t specifically target fat-loss, but as an alternative to high-sugar foods and drinks, it is very effective.

If you were only drinking water and then you decided to drink diet coke (or any other Aspartame-containing beverage) you would not see any benefits, but you wouldn’t see any downsides or side effects either!

However, if you were regularly consuming 3-4 cans of regular coca cola (552 calories) and then decided to switch to 3-4 cans of diet cola/coke zero (0-5 calories) you would end up losing weight.

There will be people that no matter how much evidence to the contrary they see will refuse to change their opinion. You might even find some people in the comments section of this article linking to blog posts that say that Aspartame can kill, or they will say that personally they are sensitive to Aspartame and it gives them headaches etc … (again something that science has disproven) [7].

Truth is that if you can dismiss hundreds of studies that disagree with your opinion, and completely trust the one study that supports your belief then you are suffering from confirmation bias. Do I have my own confirmation bias?

Yes probably, but at least my opinion is backed up by respected journal articles. I am dismissing the opinions of discredited scientists and people on Facebook with no scientific background, I am dismissing chain emails and blog posts from crazy people. Maybe the chain emails are onto something and in 15 years time everyone who has consumed Aspartame will drop dead, in which case I will offer an apology. But it seems unlikely.